Review: I've Got Your Number 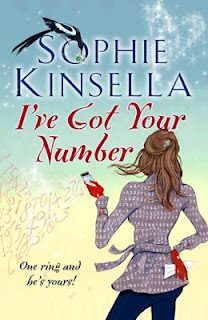 Synopsis
I’ve lost it. :( The only thing in the world I wasn’t supposed to lose. My engagement ring. It’s been in Magnus’s family for three generations. And now the very same day his parents are coming, I’ve lost it. The very same day! Do not hyperventilate, Poppy. Stay positive :) !!

Poppy Wyatt has never felt luckier. She is about to marry her ideal man, Magnus Tavish, but in one afternoon her “happily ever after” begins to fall apart. Not only has she lost her engagement ring in a hotel fire drill but in the panic that follows, her phone is stolen. As she paces shakily around the lobby, she spots an abandoned phone in a trash can. Finders keepers! Now she can leave a number for the hotel to contact her when they find her ring. Perfect!

Well, perfect except that the phone’s owner, businessman Sam Roxton, doesn’t agree. He wants his phone back and doesn’t appreciate Poppy reading his messages and wading into his personal life.

What ensues is a hilarious and unpredictable turn of events as Poppy and Sam increasingly upend each other’s lives through emails and text messages. As Poppy juggles wedding preparations, mysterious phone calls, and hiding her left hand from Magnus and his parents . . . she soon realizes that she is in for the biggest surprise of her life.

Review
I think Sophie is a fantastic chick-lit writer, she is the person who first introduced me to the chick-lit world and I'm so glad she did. I've Got Your Number is another success from Sophie Kinsella! Poppy is a lovely but somewhat naive girl who is engaged to Magnus Tavish, the man of her dreams. Her life is thrown into chaos when she loses her engagement ring, which just happens to be a family heirloom. Her day is made considerably worse when her phone is stolen, thankfully she finds a phone in a bin close by! The phone's owner, Sam, is not so pleased but lets her keep the phone on the proviso she forwards all his correspondence. Poppy and Sam find themselves meddling increasingly in each others lives with hilarious consequences.

First of all I must have looked crazy reading this book, I could not stop laughing! Poppy was so naturally funny, most of the time without meaning to be. She was ridiculously friendly with everyone she met, sending many XOXOXOXO's to everyone she text or emailed. I did want to give her a good shake sometimes, I wanted to scream at her to stand up for herself. I loved how even though Sam originally found Poppy to be an inconvenience, they brought the best out in each other. Poppy has trouble with confrontation and goes through life keeping everyone else sweet, even if it means she is at a disadvantage. Sam ignores anything that he does not have to deal with directly or that he does not deem important. Whilst Sam helps Poppy learn how to deal with people more directly, Poppy teaches Sam to be more friendly with the people in his life.

I did enjoy the footnotes that were incorporated into this book, they gave an extra insight into Poppy's life. However it was difficult to read on my Kindle as the footnotes were at the end of the chapter and not easy to access when reading.

Sophie Kinsella has created another light-hearted, crazy and funny book which was brilliant to read and great to chill out with. It was a great mood lifter and I am looking forward to reading her latest book Wedding Night.