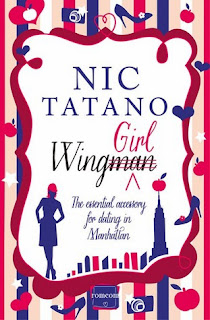 Synopsis
Wing Girl: [wing-gurl] noun
1. A young, single woman frequenting liquor-serving establishments who attracts then later repels eligible men that are eventually picked up by her friends.
2. The essential accessory for dating in Manhattan.

Because up close and personal these unsuspecting suitors get fried by a snarky attitude that's sharp enough to slice a stale bagel… which leaves her grateful friends to swoop in for the delectable leftovers!

Review
Belinda Carson AKA Wing Girl thinks she has it all going on. She's a very successful investigative reporter who does a lot of good for the people of New York City. The only thing missing in her life is a suitable man. With her fierce attitude, she has an awful habit of repelling men, leaving the leftovers to her friends. Is it time to let someone beyond the barriers and find her own happy ending?

I really loved Belinda. She is a strong female character who shows on a daily basis that she can be successful at work and maintain a social life - with a little help from her friends! Ariel, Roxanne and Serena were brilliant and I loved that they had distinct personalities and their own part to play in Belinda's life. In fact, I believe Belinda would be a little bit lost if she didn't have the strong grounding that her friends provide! Although Belinda mostly shows that tough exterior shell, the one that tells people not to mess with her, you can tell that she has a softer side hiding underneath.

I think New York was a fabulous setting for this book. From its wide variety of men to the beautiful backdrop of New York itself, Belinda definitely had a fighting chance of finding the man of her dreams - even if she didn't want to!

The butterflies inside me intensified as I read further into this story. I really did have a giggle as I read what Belinda and Co got up to, but I also felt sad as I read the more poignant moments in the story. The romance gradually builds up as Belinda begins to understand her feelings, although her plight isn't without its twists and turns! Overall, this book is very enjoyable and I would recommend it to anyone who wants to read a good romantic comedy.