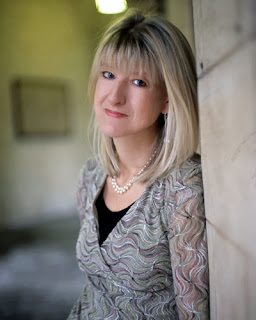 Today I am happy to welcome Sophie King to the blog. She agreed to take part in an author interview which I hope you enjoy.

You can buy her book Second Time Lucky on Amazon UK now.

Tell me about your latest book, Second Time Lucky.
It’s about four people who start life again: a divorced mother of two; a widow who still ‘sees’ her husband; a home-sick American bride with difficult stepchildren; and a recovering (handsome) alcoholic. They all have apartments in a gorgeous stately home which used to belong to the alcoholic, until he had to sell it to a developer to pay family death duties. There’s lots of humour but also ‘meat’. One magazine described it as ‘a tonic which will also keep you on your toes’.

Have you always wanted to be an author?
Yes. I wrote stories and poems from a very early age. But during my teens, a career counsellor told me that it was ‘very difficult’ to earn a living as an author so I ought to think of something more ‘realistic’. That made me cry. It also made me determined to do it. So I trained as a journalist and then began writing novels much later than I’d intended, after my third child was born.

Do you have a set writing routine? What is a typical day like for you when you are writing?
I like to write first thing in the morning. In the summer, this might be 7am but it tends to be more like 9am in the winter. Sometimes I write half a chapter before running my dog along the beach and then having breakfast. Sometimes, I start writing after breakfast. It rather depends on how eager our dog is to get out. He takes after my youngest son; neither are early risers....

If I’m in the middle of a novel, I will write about 3,000 words before lunch. Then I’ll print it out in the afternoon and read it through, making changes. Afterwards, I’ll check emails. I’m trying to do this just once a day so it doesn’t take over my writing life, but I often find myself still at my screen in the evening. I also play tennis twice a week; do a belly dancing class (great exercise!) and walk about four miles a day.

What do you enjoy most about being an author?
Getting into another world. Meeting people I’ve never thought of before but who must have been lurking. Not having to go into an office every day. (Although I’ve just started as a Royal Literary Fund Fellow at Exeter University, two days a week, which I love. My role is to help promote good writing practice which means giving people help with sentence structure etc). I also get a big thrill from seeing my books on a shelf although it always feels rather unreal.

How much research did you do for Second Time Lucky?
The idea came from someone I know who lived in a converted apartment in a stately home. It made me realise that you didn’t have to be fabulously wealthy to live somewhere like that. For research, I went back and also looked at other houses like it. I also spoke to an elderly friend of mine who’s a widow and I talked to someone who was a recovering alcoholic. I was a divorced mother of three at the time and although Louise’s character isn’t me, I do know how she feels!

Have you ever travelled to new places for book research?
All the time. There’s nothing like going somewhere to get inspiration for both setting and plot. Often, you’ll spot something that makes you add another strand to the story. For instance, I visited a village in Oxford to get some inspiration for one of my scenes in SECOND TIME LUCKY and had a picnic lunch by a stream. I used that in the novel. It works the other way too; you’ll go somewhere for fun and find it gives you an idea for another book...

What is your advice for aspiring authors?
Write about something that is niggling you; an idea that won’t go away. Get into your characters so the reader believes in them. Use magazine pictures to describe them visually and inject them with humour and warmth. Write every day and make sure there is a twist at the end of each chapter. Always revise at least twice after you’ve finished. Find an agent through networking : go to writing festivals and join organisations like the Romantic Novelists Association. I’ve written a book on this, called HOW TO WRITE YOUR FIRST NOVEL AND GET PUBLISHED by Sophie King. (How To Books.)

Tell me about your road to publication.
It was a long one! I was a journalist for years until I found time to write my first novel. It was taken on by an agent but didn’t sell. I then wrote ten more (one a year) and had two near misses. But they were both too similar to books which the publisher was about to publish. Then my youngest son went to a new school which gave me the idea for THE SCHOOL RUN. I’d just taken on a new agent and he sold it. As well as this, I’d started writing short stories a few years earlier – something I still do. They saved me because it got my fiction into print before my novels. They made me feel I could be a fiction writer after all.

What is your favourite book of all time?
Impossible question! Usually I say JANE EYRE because I identified with her as a teenager. But I also loved Arthur Ransome’s SWALLOWS AND AMAZONS and Noel Streatfeild’s WHITE BOOTS. If I ever got to Desert Island on Radio 4, I might say Palgrave’s Golden Treasury because it would keep me going – and because in poetry, every word has to count.

What are you reading at the moment?
Sarah Harrisons’s FLOWERS OF THE FIELD. I love the main character; a feisty woman who is drawn to two men on opposing sides during the Second World War.

If Second Time Lucky was made into a film, who would you have play the main characters?
I’m afraid I’m a sucker for Hugh Grant so I’d like him to play the aristocratic alcoholic. I’d like Cameron Diaz to play the homesick American. Helen Mirren would be the widow who ‘sees’ her dead husband. And Rachel Weisz would play Louise. (She was at my old school but we never knew each other!).

Thanks Sophie!
Posted by Beckie at 10:00