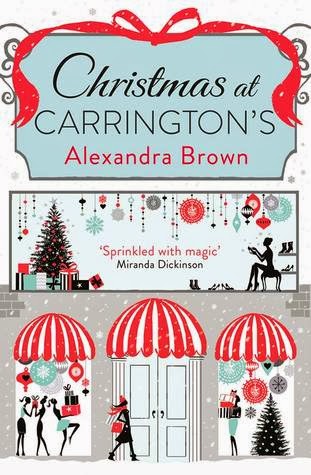 Synopsis
Carrington’s Department store is thrown into a spin when the staff learn that a hot new reality TV show is to be filmed in-store, featuring the formidable retail guru, Kelly Cooper. Georgie Hart, in charge of Luxury Handbags, is reluctant, but quickly realises that the show could give Carrington’s a new lease of life. With Christmas around the corner, she’s also hoping that the season will deliver her the perfect Christmas present, in the form of Tom, the store’s dishy boss.

Review
Georgie loves her job at Carrington's department store and being in charge of the Luxury Handbags section. It's Christmas time and her and Carrington's boss Tom are continuing to hit it off, what could possibly go wrong? What she's not banking on is TV show ‘Kelly Cooper Comes Instore’ taking over Carrington's and giving it a makeover that Georgie is not comfortable with. To top it all off Tom is romantically linked with Zara, the daughter of Kelly Cooper. Will Georgie get the perfect Christmas she's dreamed of or will Santa have something else in store for her this year?

I am delighted to be back with Georgie Hart in the lovely town of Mulberry-on-Sea. Carrington's department store always sounds so amazing, I'd love to take a trip there myself. Georgie is back with her best friend Sam and the hilarious Eddie, both who fill this book with charm and lots of laughter.

I love how Alexandra Brown has thrown a whole host of new characters into the mix. Kelly and Zara really ruffle some feathers in Carrington's and it's fab to see how everyone reacts. Christmas is such a magical time, especially in a department store, I think Alexandra captured the magic beautifully.

There is a big sense of community in Carrington's, the employees tend to stick together and support each other no matter what. It is interesting to see how attitudes change as the employees learn to except the TV show as part of their daily lives albeit dramas still ensue!

Alexandra has written an absolutely fabulous sequel to Cupcakes at Carrington's. I believe that Christmas at Carrington's is a book that can be enjoyed at any time of year. I am also excited for Ice Cream at Carrington's which is due out on 5th June. If you can't wait till then you can catch up with Georgie on twitter right now: @GeorgieHart.

My Song Choice: My Favourite Things by Julie Andrews
Posted by Beckie at 16:20