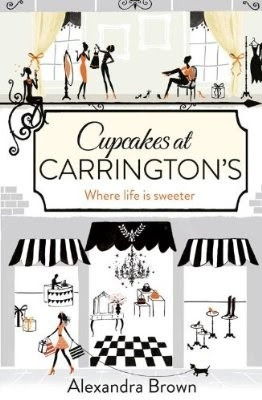 Synopsis
Georgie Hart loves her job – running the luxury handbag concession at Carrington's Department store in the pretty seaside town of Mulberry-On-Sea, and treating herself (once too often!) to a red velvet cupcake with buttercream icing in Carrington's café.

But Georgie is thrown into disarray when Carrington's is plunged into a recession-busting makeover, cueing the arrival of femme fatale Maxine, who wields the axe in her immaculately-manicured hands.

It spells a recipe for disaster for Georgie and soon she is fighting not only for her job, but also for the attentions of her gorgeous boss, James. And when hot newcomer Tom arrives, who may or may not be the best thing since sliced bread, Georgie must decide where her loyalties really lie…

Review
Alexandra Brown had me at the word cupcake! From the gorgeous cover to the delicious title, I knew this book was the one for me. I'm partial to a cupcake or 5 so I was looking forward to finding out what Cupcakes at Carrington's had in store.

Georgie feels like the luckiest girl in the world working at Carrington's Department Store. Not only does she spend her days surrounded by designer bags and other luxury items, her best friend Sam runs Carrington's Café, the perfect place to pop in for a red velvet cupcake. Everything is pretty cushty at work until Maxine is forced upon them like a case of the plague. Maxine's job is to make sure Carrington's can weather the recession storm and she doesn't take ANY prisoners.

Now not only does Georgie have to fight to keep her job, she has to compete against her boss James, who may or may not be flirting with her of late. And when the gorgeous new employee Tom is thrown into the mix Georgie is struggling to keep her life under control.

This book was a breath of fresh air from the more 'heavy' books I have been reading lately. Georgie is a likeable main character, she is relatable, kind and a good friend. I also adored Georgie's friends Sam and Eddie! Sam and Georgie have been friends since they were little girls and are still as close as ever. Their friendship felt very real and I could feel how close they were through Alexandra's writing. And Eddie... I need a friend like Eddie! He was the sweetest guy ever and gossip queen of Carrington's - no gossip could get passed his radar.

Alexandra Brown has come up with the perfect recipe. There were great characters, plenty of laughs, delicious cupcakes, a bit of mystery and plenty of romance in the air. But what made this book extra special was that Alexandra incorporated a serious undertone to the story. Georgie has to deal with some rather serious problems in her personal life that are handled with a lot of tact and understanding.

My Song Choice: Boys and Girls by Pixie Lott
Posted by Beckie at 16:00